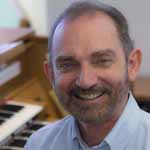 Jon was born in Michigan and is an “almost native” Arizonan, living here since the age of eight. He grew up in Sierra Vista where he began playing organ for church and accompanying choirs while in high school. He earned a Bachelor of Music degree from the University of Arizona and a Master of Music degree from Arizona State University, majoring in the fields of choral and general music education. He enjoyed a career as an elementary music teacher and retired after teaching in Arizona for 32 years. While teaching, Jon also served in leadership roles in several music teaching organizations. Jon has been an organist at many churches throughout Arizona and has also directed handbell, adult, and children’s choirs over the years. Current professional memberships include the American Guild of Organists and the Presbyterian Association of Musicians (PAM). He has a passion for congregational singing and recently became a member of The Hymn Society. As an attendee of numerous worship and music conferences, he is excited about learning innovative ideas and music to enhance worship. He enjoys square dancing, yoga, traveling, and singing with the Sonoran Desert Chorale, having toured Europe with them three times. Jon firmly believes music is indeed an international language that feeds the soul.
To contact Jon Sywassink, Organist / Accompanist please use the form below.
Or call: 480.966.6267